January to July .... and everything in between 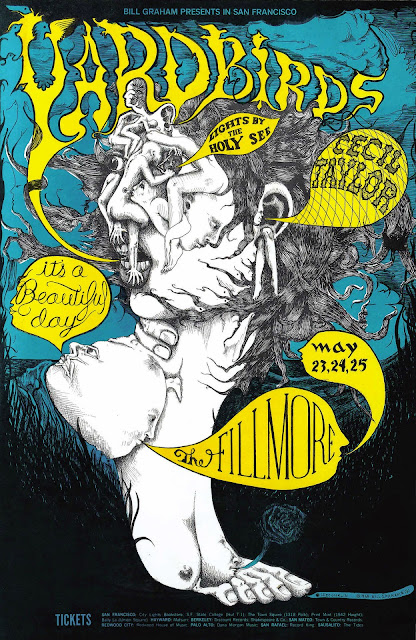 Lee Conklin, Yardbirds, It's a Beautiful Day, Cecil Taylor, The Fillmore, San Francisco, 23, 24, 25 May 1968. Original poster, handbill and ticket design.   "The Yardbirds were a powerhouse live act" (Chris D reja 2007) "We knew [the 1968 American tour] was going to be the last one, and all the pressure was off. We played well and had a really good time." (Jimmy Page 1983) The Yardbirds, 1968, locality unknown ?England. Why the Yardbirds? Since the mid 1970s I have been a fan of the Yardbirds - from the original, blueswailin' Five Live Yardbirds LP of 1963-5 with Eric Clapton, through the twin lead guitar monster of Jeff Beck and Jimmy Page pumping out Happening Ten Years Time Ago or Strollin' On (Train Kept a Rollin') in the 1966 Antonioni movie Blow Up , and on to the final 4-piece that toured England, Europe and the United States during 1968 prior to morphing into Led Zeppelin around August - September of that year
24 comments
Read more